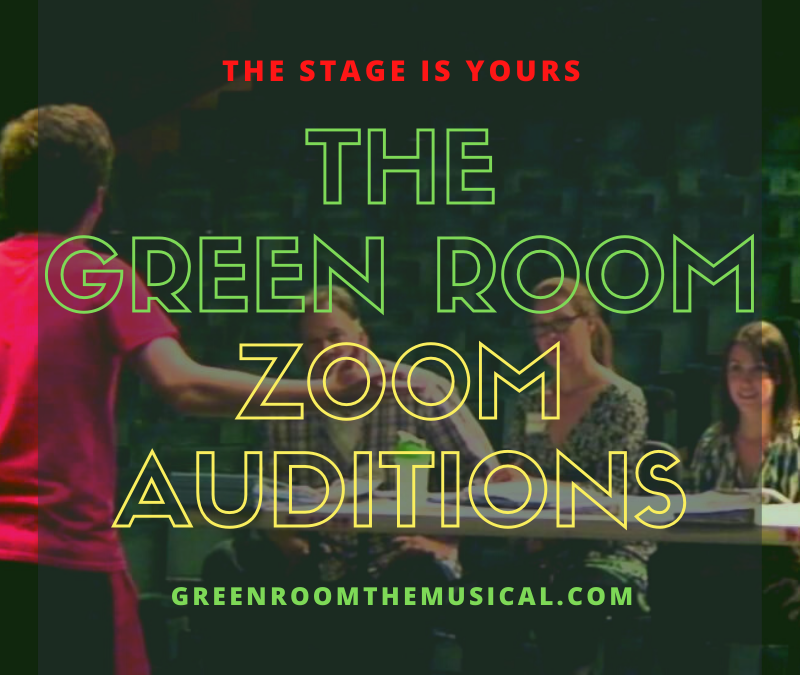 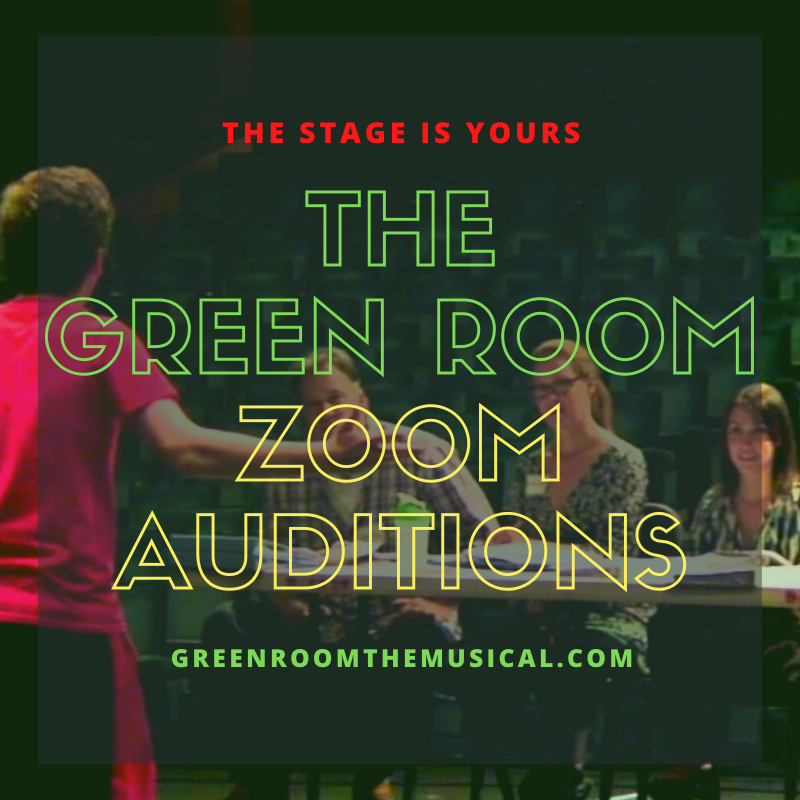 Musical Theatre singers (ages 18-25), do you want to just sing out loud? Well then come and audition for a short, fun Zoom selection performance of the award-winning, Off-Broadway show THE GREEN ROOM. Music and lyrics by Chuck Pelletier. Book by Rod Damer and Stephen Foster. We have chosen two minutes from each of the 4 show-stopping songs from the musical, for talented singers to choose from.
WE WANT A DIVERSE CAST: POC are encouraged to audition.
There is NO PAY, but we will be posting the Zoom recording all over Social Media!

UPLOAD a video to YOUTUBE of yourself singing from the song list below (preferred), or sing a song in the STYLE of the show adding the hashtag  #thegreenroommusicalaudition to your video.
You must use the hashtag to be considered.
Send completed audition link to director Darren Numer: RnDCasting@gmail.com

You must bring your A game as all final selections will be approved by book writer C. Stephen Foster. (Award-winning writer of “Awakening the Actor Within” and “That’s Opportunity Knocking”)

The zoom recording will take place on September 30th. Because of Covid-19 taking center stage around the world, I just felt like we could use a singing break. What better way than this 4-character musical? Rehearsals will begin September 15th. I look forward to working with you, and to the fun that will surely come.

Thank you very much on behalf of The Green Room and Director, Darren Timothy Numer.

Anna is an extremely beautiful, youthful, up-tight goody-goody acting major. She loves structureand always gets cast as the lead in all the productions. She is obsessed with shaping John Radford up and making him husband material. She sings the show-stopping “I Wanna Go To Extremes” and the beautiful duet “What do I Think of Me”.

Divonne is very outspoken, funny and quirky. She is a younger Ethel Merman, Bette Midler or Barbra Streisand. She doesn’t fit into the academic scene at all and constantly threatens to move to New York. She’s frustrated that she has never gotten a lead role; instead she gets walk-ons or worse. Divonne falls in lust with Anna’s nerdy brother, Cliff, but soon dumps him. She sings the award winning song “It’s All About Me” and the heart-melting “It Comes Easy.”

Prototype: Elphaba in “Wicked,” Maureen in “Rent,” Dot in “Sunday in the Park,” Rizzo in “Grease,” Velma Kelly in “Chicago”

Cliff is geeky, bright and boyish. Must be funny! Anna’s younger brother who follows her lead and attends St. Gustov to act and write. He might be gay. He becomes best friends with playboy John Radford and romantically involved with Divonne. He sings the show-stopping “Nothing Can Stop My Boys” and “Destination Stage Left.”

John is cocky, self-assured and jockish—a typical frat boy. He is in lust with Anna, but she continually gives him the brush off. His big-mouth, bad-boy attitude covers a heart of gold. He brags about being “the big man on campus” and gets the lead in every play. His dad wants him to study architecture, but he wants to pursue acting. He sings “Bachelor’s Anthem” and “In the End”
Prototype: Roger in “Rent,” Danny in “Grease,” Billy Flynn in “Chicago”

HERE ARE THE CHARACTERS AND THEIR SONG LYRICS:

I WANNA GO TO EXTREMES

I’M SICK OF BEING A STRAIGHT-LACED PRUDE

I WONDER HOW I’D BE ONCE I DOWNED A FEW,

She grabs a can of beer, twirls it in the air as if

she’s cool, and catches it; she then cracks it open

and it sprays everywhere; she quickly throws it

I WANNA BE WILD, AND SMOOTH AND COOL,

LET’S SMOKE A BOING. AND ROLL A SCOOBIE–DOO

I’LL GO TO A PLACE I’VE NEVER BEEN BEFORE,

IF I CAN HOLD ON TO THIS FANTASY THAT FAR.

LIKE SARAH WHEN SHE DRINKS RUM IN GUYS AND DOLLS

I’M JUST A GIRL WHO CAIN’T SAY NO TO WILL.

I’M HEADIN’ DOWN TO THE FOOTBRIDGE WITH HAROLD HILL

AND SCREAM THAT LIFE’S WORTH LIVING

AND BLOW OFF THE NEXT OIL CHANGE IN MY CAR

IT’S ALL ABOUT ME

THE BIG SOUND OF MUSIC AUDITIONS HAD COME,

I SANG BOTH MY SONGS, HAD THEM UNDER MY THUMB,

I TOLD THEM I HAD MY HEART SET ON MARIA,

SOON UP WENT THE LIST ON THE CALL BOARD UPSTAIRS,

I LOOKED FOR MY NAME, AND I SAW IT RIGHT THERE,

I WENT TO THE LIBRARY, STUDIED THE SCORE,

I FOUND MY THREE LINES, COULDN’T FIND ANY MORE

THEN I REALIZED THE NAZI’S BLACK CAR REPRESENTS

THE WHOLE THEME OF DECEIT, THEN THE STORY GETS TENSE,

THAT CAR IS WHAT THEY MUST DRIVE OFF IN THE END,

AND THIS IS SIGNIFICANT, NO ONE BEFRIENDS THEM,

THE JOKE’S ON THE NAZIS, THE NUNS ARE ALL LIARS,

AND I PLAY THE NUN WHO STEALS THE DISTRIBUTOR WIRES,

SO WHO’S THIS MARIA,

IT’S ALL ABOUT ME.

I AM A VIRILE MAN

I CAN’T BELIEVE THIS

I CAN’T CONCEIVE THIS –

WELL, YES, I GUESS I CAN

I HAVE GOT THE BALLS OF YOUNG CLINT EASTWOOD

I PRODUCE A CROWD OF SPERM CELLS TOUGH AS

YOU CAN PUT CONDOMS,

LOTS OF THEM, ON ‘EM

HOPING THEY WON’T GET OUT

THEY’RE ALL SO HANDY

MARVEL OUGHT TO BASE A COMIC ON THEM

MAYBE WITH A LINE OF TOYS

ADMIRAL ERECTION AS THEIR LEADER,

“NOTHING CAN STOP MY BOYS!”

I WAS ALWAYS GREAT AT MATH SHE SAID,

SHE WASN’T DOING WELL WHEN

I CAME HOME FROM SCHOOL TO SAY

ALL HER LITTLE DREAMS FOR ME WERE DEAD.

THEN MY BROTHER FINISHED UP HIS LAW DEGREE,

I SPENT ANOTHER SUMMER ON THE STAGE.

AND THOUGH SHE ALWAYS WONDERED WHY, SHE NEVER

I THINK IF SHE WERE STILL ALIVE, SHE’D SAY.

IN THE END, YOU DO WHAT YOU HAVE TO DO,

AND IN THE END, YOU DO WHAT YOU LOVE,

AND IN THE END, YOU DO WHAT YOU HAVE TO DO,

BECAUSE IT’S YOU, IN THE END,

THAT HAS TO LIVE WITH IT.